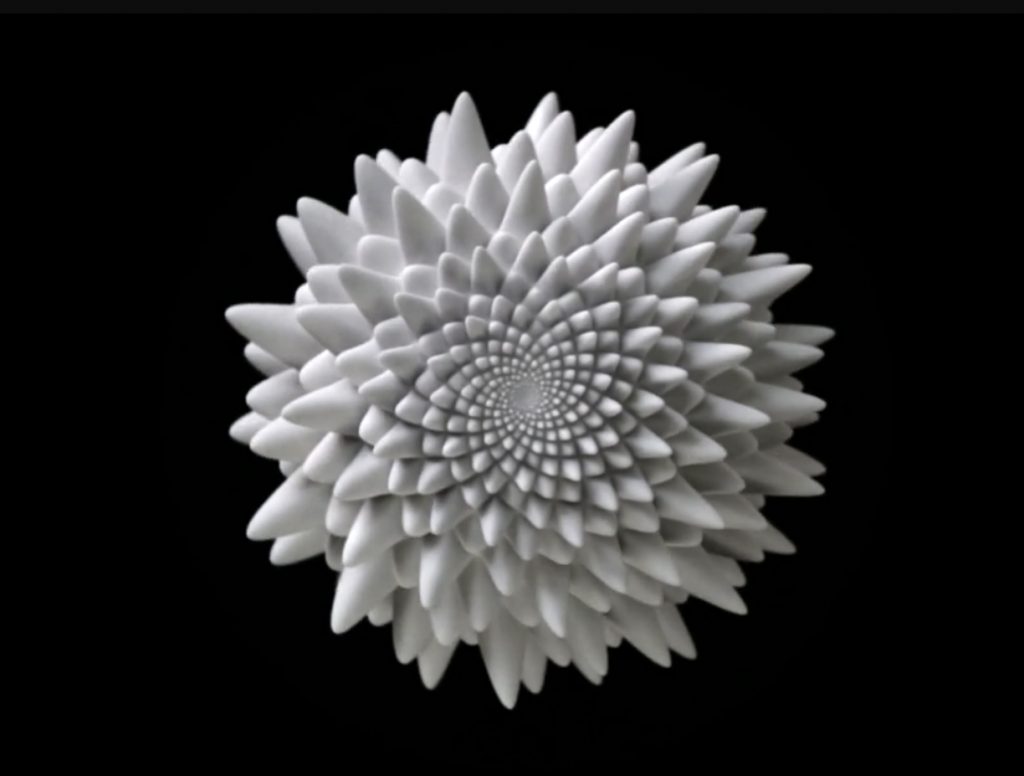 Blooms are 3D printed sculptures designed to animate when spun under a strobe light. Unlike a 3D zoetrope, which animates a sequence of small changes to objects, a bloom animates as a single self-contained sculpture. The bloom’s animation effect is achieved by progressive rotations of the golden ratio, phi (ϕ), the same ratio that nature employs to generate the spiral patterns we see in pinecones and sunflowers. The rotational speed and strobe rate of the bloom are synchronized so that one flash occurs every time the bloom turns 137.5º (the angular version of phi). Each bloom’s particular form and behavior is determined by a unique parametric seed I call a phi-nome (/fī nōm/).

For this video, rather than using a strobe, the camera was set to a very short shutter speed in order to freeze individual frames of the spinning sculpture.

Through the use of internal stops, each arm is constrained to rotate a maximum of 68.75° (1/2 the Golden Angle) relative to its neighboring layer.

A self-similar tiling, in which every piece is a unique size, but all pieces are the same shape. Each piece is added/removed at an angle of ~137.5 degrees from the previous. This angle—known as the Golden Angle—is manifest in natural objects such as pine cones and sunflowers.

Through the use of internal stops, each layer in this tower is constrained to rotate a maximum of 137.5° (the Golden Angle) relative to its neighboring layer.

A TALK ABOUT MY PHI-BASED EXPLORATIONS

This is a talk given by Paul Dancstep of the Exploratorium.