The specialist in logos and branding, Maria Grønlund. 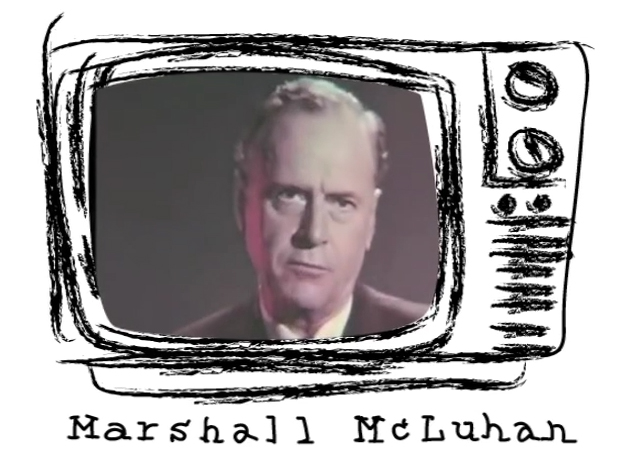 Marshall McLuhan, CC (July 21, 1911 – December 31, 1980) was a Canadian professor, philosopher, and public intellectual. His work is viewed as one of the cornerstones of the study of media theory, as well as having practical applications in the advertising and television industries.

McLuhan is known for coining the expression “the medium is the message” and the term global village, and for predicting the World Wide Web almost thirty years before it was invented. He was a fixture in media discourse in the late 1960s, though his influence began to wane in the early 1970s. In the years after his death, he continued to be a controversial figure in academic circles. With the arrival of the internet, however, interest has renewed in his work and perspective.

The main concept of McLuhan’s argument (later elaborated upon in The Medium is the Massage) is that new technologies (like alphabets, printing presses, and even speech itself) exert a gravitational effect on cognition, which in turn affects social organization: print technology changes our perceptual habits (“visual homogenizing of experience”), which in turn affects social interactions (“fosters a mentality that gradually resists all but a… specialist outlook”). According to McLuhan, the advent of print technology contributed to and made possible most of the salient trends in the Modern period in the Western world: individualism, democracy, Protestantism, capitalism and nationalism. For McLuhan, these trends all reverberate with print technology’s principle of “segmentation of actions and functions and principle of visual quantification.”

In his 1989 posthumous book, The Global Village, McLuhan, collaborating with Bruce R. Powers, provided a strong conceptual framework for understanding the cultural implications of the technological advances associated with the rise of a worldwide electronic network. This is a major work of McLuhan’s because it contains the most extensive elaboration of his concept of Acoustic Space, and it provides a critique of standard 20th century communication models like the Shannon–Weaver model. McLuhan distinguishes between the existing worldview of Visual Space – a linear, quantitative, classically geometric model – and that of Acoustic Space – a holistic, qualitative order with a complex intricate paradoxical topology. “Acoustic Space has the basic character of a sphere whose focus or center is simultaneously everywhere and whose margin is nowhere. The transition from Visual to Acoustic Space was not automatic with the advent of the global network, but would have to be a conscious project. The “universal environment of simultaneous electronic flow” inherently favors right-brain Acoustic Space, yet we are held back by habits of adhering to a fixed point of view. There are no boundaries to sound. We hear from all directions at once. Yet Acoustic and Visual Space are in fact inseparable. The resonant interval is the invisible borderline between Visual and Acoustic Space. This is like the television camera that the Apollo 8 astronauts focused on the Earth after they had orbited the moon.

Reading, writing, and hierarchical ordering are associated with the left brain, as are the linear concept of time and phonetic literacy. The left brain is the locus of analysis, classification, and rationality. The right brain is the locus of the spatial, tactile, and musical. “Comprehensive awareness” results when the two sides of the brain are in true balance. Visual Space is associated with the simplified worldview of Euclidean geometry, the intuitive three dimensions useful for the architecture of buildings and the surveying of land. It is too rational and has no grasp of the acoustic. Acoustic Space is multisensory.

McLuhan writes about robotism in the context of Japanese Zen Buddhism and how it can offer us new ways of thinking about technology. The Western way of thinking about technology is too much related to the left hemisphere of our brain, which has a rational and linear focus. What he called robotism might better be called androidism in the wake of Blade Runner and the novels of Philip K. Dick. Robotism-androidism emerges from the further development of the right hemisphere of the brain, creativity and a new relationship to spacetime (most humans are still living in 17th century classical Newtonian physics spacetime). Robots-androids will have much greater flexibility than humans have had until now, in both mind and body. Robots-androids will teach humanity this new flexibility. And this flexibility of androids (what McLuhan calls robotism) has a strong affinity with Japanese culture and life. McLuhan quotes from Ruth Benedict, The Chrysanthemum and the Sword, an anthropological study of Japanese culture published in 1946: “Occidentals cannot easily credit the ability of the Japanese to swing from one behavior to another without psychic cost. Such extreme possibilities are not included in our experience. Yet in Japanese life the contradictions, as they seem to us, are as deeply based in their view of life as our uniformities are in ours.” The ability to live in the present and instantly readjust.

The Medium Is the Massage, published in 1967, was McLuhan’s best seller, “eventually selling nearly a million copies worldwide.” Initiated by Quentin Fiore, McLuhan adopted the term “massage” to denote the effect each medium has on the human sensorium, taking inventory of the “effects” of numerous media in terms of how they “massage” the sensorium.

In The Medium is the Massage, McLuhan also rehashed the argument—which first appeared in the Prologue to 1962’s The Gutenberg Galaxy—that all media are “extensions” of our human senses, bodies and minds.

Finally, McLuhan described key points of change in how man has viewed the world and how these views were changed by the adoption of new media. “The technique of invention was the discovery of the nineteenth”, brought on by the adoption of fixed points of view and perspective by typography, while ” the technique of the suspended judgment is the discovery of the twentieth century”, brought on by the bard abilities of radio, movies and television.

The past went that-a-way. When faced with a totally new situation we tend always to attach ourselves to the objects, to the flavor of the most recent past. We look at the present through a rear-view mirror. We march backward into the future.

In Laws of Media (1988), published posthumously by his son Eric, McLuhan summarized his ideas about media in a concise tetrad of media effects. The tetrad is a means of examining the effects on society of any technology (i.e., any medium) by dividing its effects into four categories and displaying them simultaneously. McLuhan designed the tetrad as a pedagogical tool, phrasing his laws as questions with which to consider any medium:

The laws of the tetrad exist simultaneously, not successively or chronologically, and allow the questioner to explore the “grammar and syntax” of the “language” of media. McLuhan departs from his mentor Harold Innis in suggesting that a medium “overheats”, or reverses into an opposing form, when taken to its extreme. 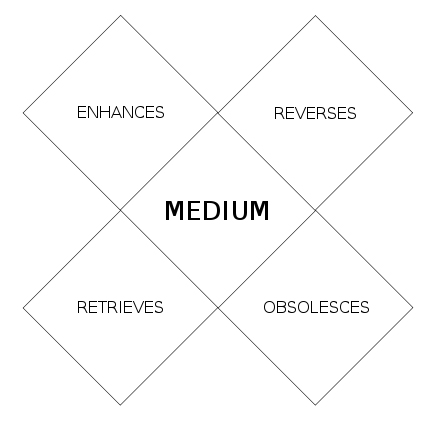 Using the example of radio: