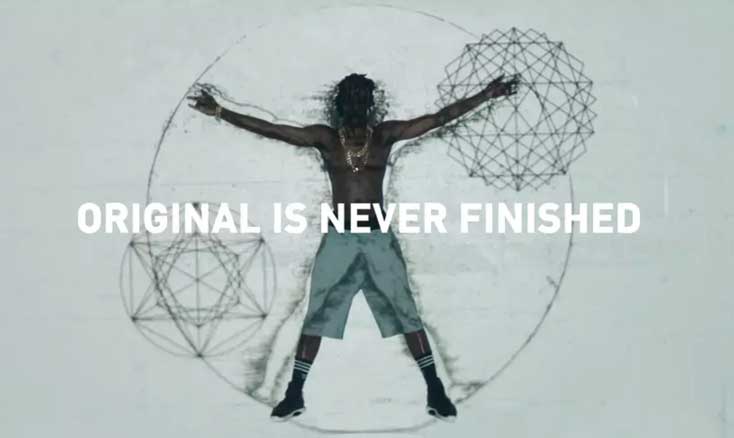 True to the name, Adidas have yet again re-envisioned ‘Original is never finished’. Now with the help of a new set of creators, and a new take on the iconic Frank Sinatra track, they recreate an original film to prove that #ORIGINALis never finished.

When something is pushed far enough, it becomes original again.

When something is pushed far enough, it becomes original again. It is an idea that rings true around the globe.

True to the name, Adidas continue the message of ‘Original is never finished’. Now with the help of a new set of creators — Eason Chan, Chen Man, Meng Jia, Kendall Jenner, James Harden, 21 Savage, Young Thug, and Playboi Carti — and new cultural contexts, scenes from the original film are reimagined, their way, with a new take on the iconic Frank Sinatra track. Proving once more that #ORIGINALis never finished.

Uniting some of the world’s most influential creators, the latest film presents a new definition of originality by building upon what came before to create what will come next.

“Nothing is original. Steal from anywhere that resonates with inspiration or fuels your imagination. Devour old films, new films, music, books, paintings, photographs, poems, dreams, random conversations, architecture, bridges, street signs, trees, clouds, bodies of water, light and shadows. Select only things to steal from that speak directly to your soul. If you do this, your work (and theft) will be authentic. Authenticity is invaluable; originality is non-existent. And don’t bother concealing your thievery – celebrate it if you feel like it. In any case, always remember what Jean-Luc Godard said: ‘It’s not where you take things from — it’s where you take them to.'” — Jim Jarmusch